Databases have long had difficulty displaying the name Null. That is because database systems are wired to read this as a value or more accurately, the non-value “null”. It is deeply ingrained in their programming code and used in many software programs. To be clear, “null” does not have a zero (0) value. It means that the value is unknown.

The General Services Administration’s (GSA) Systems for Awards Management (SAM) is not immune to this programming. It has been discovered that the name Null will have a “null” value in its database. It was unable to display a value or string of text which should otherwise be part of an individual’s last name. For example, it would reflect John Null as John “(empty field)”. This makes it challenging to confirm which individuals are excluded due to the absence of a last name in their records.

Note that this situation is not confined to the GSA-SAM. This exists across a wide range of industries that employ the use of databases. It is an unavoidable circumstance, especially when the software program is created including the “null” attribute. This can be observed in the financial services industry, for instance. A bank having depositors with Null as a last name in their system might mail letters to the right address with the correct first name. The last name however would be left blank because their printing system will read Null as “null” or unknown from their database. 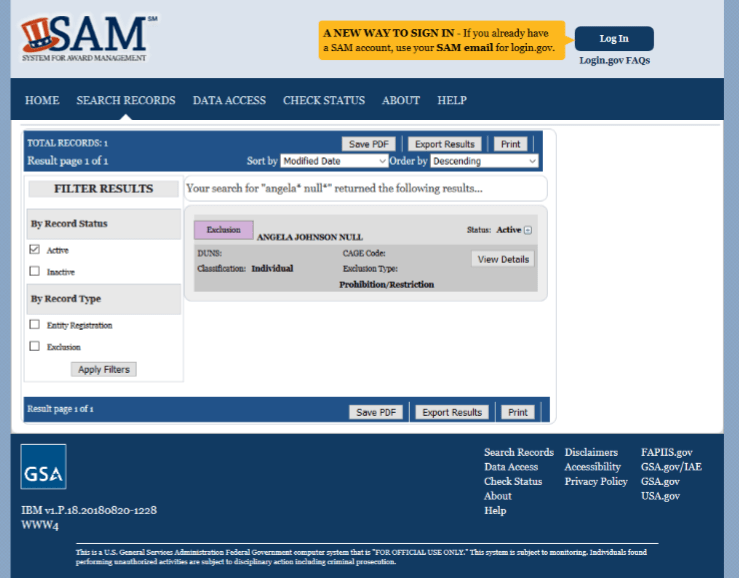 An actual SAM search was performed on Angela Johnson Null online. It yielded an “Exclusion” result with an Exclusion Type of Prohibition / Restriction. Clearly, the record is on their searchable database.

The problem however was when this list was actually downloaded. Angela Johnson Null’s name would be reflected as Angela Johnson only. Her last name Null would no longer appear.

The case is the same for the three other individuals following her name. Observe Bruce L., John W. and Kelly. They all have a last name Null however due to a bug in the SAM system, their last names cannot be detected. The “null” dilemma is quite common especially for institutions with large sets of data. To be clear, such names were picked up by our systems. It was because they were included in OIG’s LEIE so any risk that they could be missed under the SAM was averted.

OIG Exclusion for the Uninitiated

Health care providers who are responsible for billing Medicare and Medicaid have a duty to know if their independent contractors and employees have been excluded from participating in federal health c...

Is Exclusion Screening even possible? The U.S. Government Accountability Office has recently released the results of a study conducted in order to gauge the reliability, uniformity, and exhaustibility...

Is Your Partner Excluded? Doctors, Take ...

An attorney with HHS’ Office of Inspector General said Thursday that the OIG is hiring additional lawyers to look into taking more administrative actions against doctors. They're looking for the...